Panchgani Cottages your quality bed and breakfast property offers comfortable accommodation in Pānchgani. Managed and run by the owners gives you a homely feel and sense of security when you are away from your home.

Equipped with modern and well planned air-conditioned rooms include a HD flat screen satellite TV and an outdoor seating area for your convenience. Panchgani Cottages is located at the foothill of one of the most scenic points of Panchgani (Table Land) and right next to the oldest temple of Panchgani (Ghatjai Temple ) to which our guests can even walk to. The Main Panchgani Market is at a 5 min walking distance. Mahābaleshwar is 15 km from Panchgani Cottages, while Wai is 10 km away. The Pune International Airport is 74 km away. 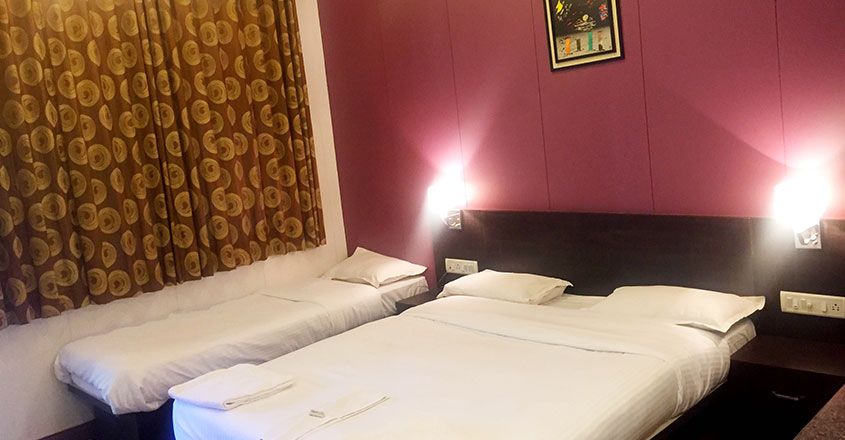 All our rooms are very well planned and our priority is cleanliness and customer satisfaction. Each room includes a private bathroom with 24 hours hot and cold water, Maximum of 3 Guests can be comfortably accommodated in each room. Tourist Busses also are easily accessible and are a few minutes walk from the property.

Sydney Point: This point is situated on a hillock facing the Krishna Valley. One can see from here the glittering waters of the Dhom Dam, and Pāndavgad and Mandhārdeo. Sydney point is about 2 km from Panchgani Bus stand.
Table Land: This flat large expanse of laterite rock is the second longest mountain plateau in Asia. Some spacious caves including the “Devil's Kitchen” are visible from here.
Parsi Point: This scenic point is situated on the way to Mahabaleshwar, and overlooks the Krishna valley and the blue shiny waters of the Dhom Dam.
Devil's Kitchen: Situated at the south of the table land, the Devil's Kitchen has a mythology associated with it: It is believed that the Pāndavas of the Mahābhārat epic had stayed here for a while. Pāndavgad Caves (near Wāi) are also said to be built by them then.
Mala's Fruit Products:Mala's is one of the best Jam developers in the history of India.Mala's introduced the word 'JAM' in India. Panchgani is the hometown of Mala's Fruit.
Mapro Garden: Situated on the curvaceous roads between Panchgani and Mahabaleshwar, it is easily accessible by buses originating both from Panchgani and Mahabaleshwar.
Devrai Art Village: Devrai art Village is a non profit initiative to connect with nature and celebrate creativity. A core group of highly skilled Adivasi craftsmen and artists from the naxalite affected areas of Gadchiroli & Chattisgarh find a livelihood and a safe refuge here in Panchgani.
Velocity: A Naturistic getaway to Go Karting, Amusement and Food, an all in one funstop for everybody in your Family!!!
On Wheels: Children Amusement Park during your vacation in Panchgani.